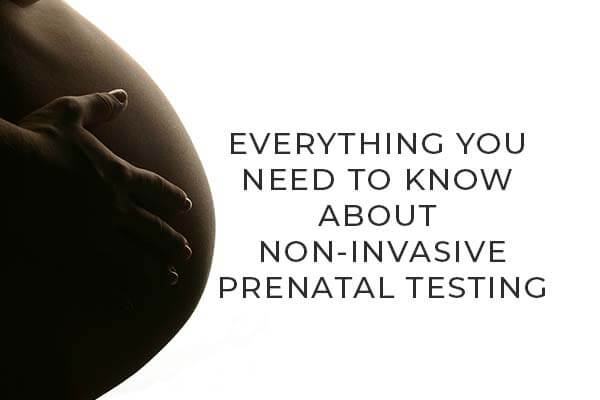 The screening test, Non-Invasive Prenatal Testing (NIPT), is designed to look for genetic and chromosomal abnormalities. However, before undergoing this relatively new type of screening, it’s a good idea to familiarise yourself with what it is, how it works and any potential complications or risks it might present.

To help you decide whether or not it’s right for you, below you’ll discover everything you need to know about Non-Invasive Prenatal Testing.

NIPT is a simple blood test which analyses tiny fragments of DNA which circulates throughout the body when you’re pregnant. Sometimes referred to as NIPS (Non-Invasive Prenatal Screening), it can determine whether the foetus is likely to be born with genetic abnormalities. The fragments tested aren’t found within the cells like most DNA. Instead, they float around freely.

The test is largely used to detect the presence of Down’s Syndrome, Trisomy 18 and Trisomy 13. It can also be used to screen for additional abnormalities caused by copied or deleted parts of the chromosomes. It’s also starting to be used for genetic issues that are caused by variants within single genes.

There are no risks associated with NIPT. It’s a non-invasive blood test, producing the same side effects as any blood test. There’s no risk to the baby and it can be carried out quickly. This is largely what drives the popularity of the test.

There’s a lot of misconceptions over the effectiveness of NIPT. The first thing patients need to realise is that the test doesn’t diagnose chromosomal abnormalities. Instead, it reveals the chances your baby would be born with an abnormality. So, it’s not necessarily definitive if the foetus is found to have some abnormalities.

In terms of how accurate the test is, for Down’s Syndrome it has been discovered to be 99% accurate. That being said, false positives can occur so it’s advisable a follow-up amniocentesis or a CVS is carried out to confirm the result.

As for other abnormalities, the accuracy rates vary. So, if you do get a high-risk result back, it’s always worth discussing the risks with your doctor. They’ll be able to schedule follow-up testing to confirm whether the NIPT was accurate.

4. When can I undergo Non-Invasive Prenatal Testing?

If you want to undergo NIPT, you can have it any time after 10 weeks into the pregnancy. It’s a good idea to undergo the test before going for your first Nuchal scan. You can book a NIPT here at SureScan. Call 07835 736627 to arrange your appointment.

Overall, NIPT is a great non-invasive way of determining whether or not your baby has any chromosomal abnormalities. However, it’s important to make sure you understand what the testing involves and what it can and can’t detect.